skip to main | skip to sidebar

First few pages of new sketchbook, various doodles, ideas for paintings, tattoos, and a medley of other projects. 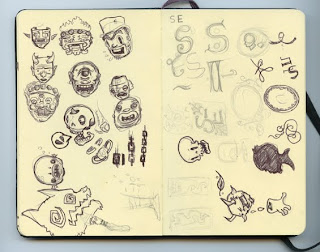 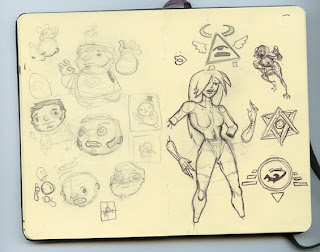 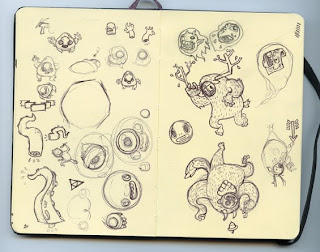 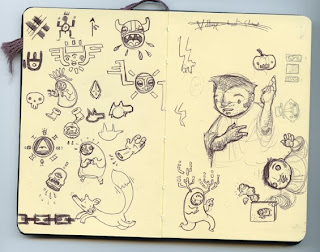 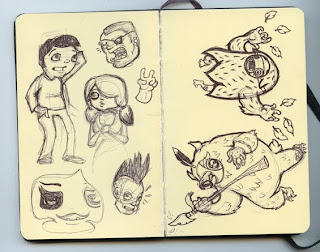 So I'm not dead! Just been very busy. As I mentioned on a post on my website, I've been interning at SXSW! Mainly for the interactive festival and maaaainly doing publication and signage work! It's pretty exciting stuff!

Post festival I'll be updating my website and other auxiliary sites such as this one as well! It's one of my top priorities along with not doing anything for a little bit to celebrate my graduation! that will be happening as well once my internship is over.

So very big changes on the horizon, not that my life has exactly been a stable rock of consistency the past like, three years. But really big sweeping things coming soon I think. More art related things to be posted soon!
Posted by Kid Kaiju at 12:14 AM No comments:

Feel free to stop by, check out my gallery, see links to fellow artist friends, and keep up to date on any future projects!
Posted by Kid Kaiju at 1:53 AM No comments:

Thought I'd do another small sketchdump as I go through my sketchbook that's about to fill up. I threw in a few older doodles in the top right of this first image. I found them scanned in from before and just wanted to do a little comparing. 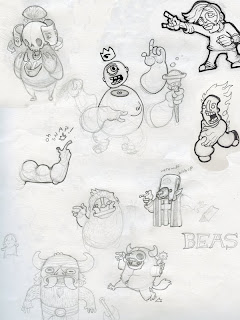 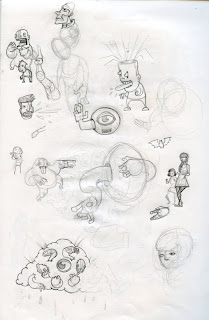 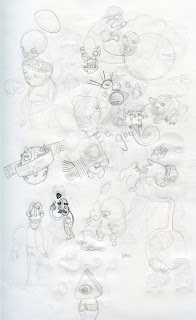 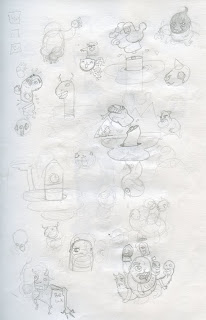 In other news, I'll be participating in this years "Sketchbook Project" hosted by the Art House Co-op out of Brooklyn, NY. If you haven't heard of this it sounds like two tons of fun. Pretty much you order one of their sketchbooks, pick a broad topic to interpret, and fill up the sketchbook with your art in anyway you want. You have to mail back the completed book by January 15th for them to enter the sketchbook into a nation wide tour of art shows where people can browse all these books collected by the Art House. Best part is that anyone and everyone can participate! Click the image below to get more info and order your book if you want to join the fun! Also awesome motivation to keep up with your doodling.

Hey there internets! I know I kind of just started this blog then left it alone, but I do intend to keep up with it, things are just off to a rocky start. I'm taking the time now though to do the first installment of another recurring theme I have planned for this blog: the Link Dump.

Instead of just showing my art I want to provide links to resources and inspirations that I'm currently looking to in the hope that any other art interested person sees this then maybe they too can get inspired.

So without further ado, the theme for today's link dump is...flash games!

I know what you're thinking but these don't exist for the sole purpose of distracting you when you should be working on more important things! Many now a days have become works of art in their own right, existing as a medium that combines somewhat basic video game foundations, animations that take limited tools and stretches them to their limits, some of the best atmospheric music I've heard, and a community of independent artists, programmers, and storytellers that's very nurturing to the concept of trying new things. And one thing I've always loved about any form of videogame that is approached as an art form, is that the format creates for a rather unique experience that cannot be translated to other mediums.

Here are some examples that have recently succeeded in sparking artistic inspiration in me within even the first few seconds of playing:

This platform game uses a very detailed low-bit graphic style to tell a basic story about a heartbroken hero risking his life to save the girl who dumped him from an invading army of alien werewolf like creatures.

While this sounds like a cheesy B-movie, this game brings a lot of interesting twists to the field. The grey color palette of the scenery is splattered in dripping pixels of blood the second you attack an enemy, and not just in a basic punch, shoot, or jump on their head kind of attack, you the hero are more monster than these shadow beasts as you leap upon them and savagely tear at their faces. This alone was enough to get my mind rolling as one subject I have been thoroughly interested in since I was young is the archetype of the beast or monster in stories, and this game really plays with the norms in an interesting and visceral way. There is also no dialogue, instead any of the character's feelings are acted out in a sort of pantomime or iconographic word bubble.

A puzzle solving game that really lays on the creepy factor. I really enjoyed this game even with all its vagueness because it really had some unique scenes in it that I won't even bother to describe. It's pretty short so play through it, don't try too hard to make sense of it at first though, allow yourself to just soak in the visuals and atmosphere of this mini-world that's been created and soon you'll find yourself submerged in what seems like an incredibly direct visual representation of another persons haunting and lingering dream.

3.) The Company of Myself

I'll admit, I never actually beat this one. It's another puzzle platformer that really lays the sorrowful, isolated, and down right depressing vibe on thick. Besides having some of the best atmospheric music on a flash game I've heard lately and bringing a rather poetically simple style of writing to the genre, the game also plays with the mechanics of the puzzles. To solve things you must literally rely on yourself, planning things ahead you walk the character to where he needs to be, then hit a button to start back at the level entrance while a ghost of yourself repeats what you last did. You then have to use these ghosts as platforms or in other ways to complete the area and move on. Don't spoil the ending for me! I need to go back and finish it.

Another one I didn't quite finish as it got crazy stupid hard by the end. But this one, out of all these, had the most intersting and dynamic visuals. The concept is really basic as well, you awake after being frozen in cryostasis to find that the whole world has been frozen in an apocalyptic ice age. The only other thing to emerge from the other cryo-tubes that you can see is a small bicycle. Your only other hint of life is a trail of frozen bubbles coming from another open cryo-tube that you decide to follow. The gameplay is fun, you control the speed of your peddling and timing of your jumps, which starts off as pretty easy but quickly gets intense as you progress. And like I said earlier, I've never seen a desolate, lonely, frozen world look so good.

That's a few for now, I'll hopefully be back before another couple of months pass in order to post some more sketch dumps!
Posted by Kid Kaiju at 4:14 AM No comments: 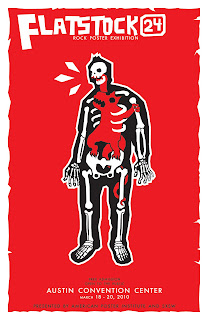 I'm not usually the one to be proud of my work and I'm especially not keen to bragging but since this is already being announced in a few venues I felt it deserved at least a mention here as well. Earlier this month I entered and won a design contest wherein I had to design a poster advertising for the 24th Flatstock convention that happened during the most recent SXSW. For those who may not know, Flatstock is an event that happens about 4 times a year where artists come to showcase their work relating to the field of screenprinting and rock show poster designs.

The contest was only open to art and design students in Texas and was a blast to be a part of. Thanks to everyone who wished me luck/congratulations and a huge thanks to those who put it on and really had a love of passing on the knowledge of screen printing to an interested younger generation of artists.

Here is the site for said contest where you can see some of the other winners and entrants: LINKITY-LINK-LINK

I was able to go by Flatstock for one of the days it was open and had a great time there as well. Spent a bit more money than I had anticipated but am now the proud owner of a small stack of prints that I must find frames for. Out of the handful I purchased, two to note are one that wasn't actually a screen print but a high quality art print nonetheless from one of the bigger names in illustration right now, Tara McPherson,whom I have been a big fan of for sometime, and the biggest print I bought was by an artist whom I learned is a fellow Austininte that I've just recently gotten into, Jumango.

In other news I'm between two quarters for a short amount of time and will hopefully be able to throw up a few more posts before classes start again. Also I really need to design a banner or something for this blog, it's kind of plain thus far methinks...
Posted by Kid Kaiju at 4:35 AM No comments: 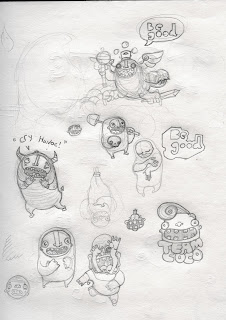 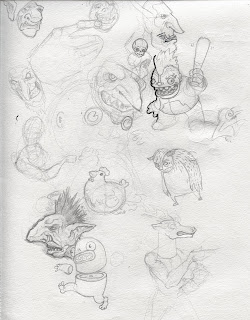 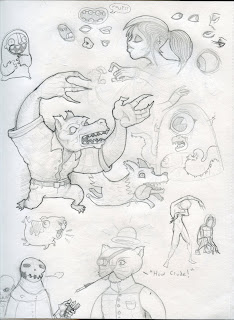 Here's just a collection of some random sketchbook pages I thought I would throw up to christen this new blog! Nothing too special, most of them are doodles from while I'm in class or done during a group art hang out with some friends.
Posted by Kid Kaiju at 4:52 AM No comments:

Kid Kaiju
Austin, TX, United States
I am a Graphic Designer and Illustrator working out of Austin, TX. I love cartoons, logos, infographics, video games, and pickles on my sandwiches.

All Artwork copyright Sean Simons and not to be used or reproduced without the permission of the artist. Contact: SeanMSimons@gmail.com

Other Art Blogs that are Totally Awesome